Today's options for doing development on Windows [1] in Dockerized projects: 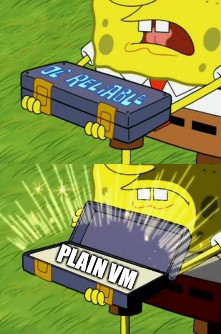 The classical setup. The best performance and UI comes by running the apps (editors and tools) inside the VM and display them on the host desktop via a X11 server running in the host OS.

This requires the user to manually do configure these:

Hyper-V comes with a builtin NAT switch but it is severely lacking in the features area, notably it doesn't have port forwarding.

However Windows allows you to create your own NAT virtual network adapter. Run this in a powershell (press Start + X, Run powershell (Admin)):

For port forwarding we have two options:

If you want your VM to be accessible to other computers use NAT mappings, otherwise use port proxies. Performance is surely different but unlikely to matter for typical development.

The alternative, port proxies allow you to specify the listen address, for example this only allows local connections:

And finally you can test your port:

You want to use something that runs the Hyper-V kernel modules for correct shutdown handling - Ubuntu or Fedora are tested to work correctly.

Ubuntu has an installation wizard: 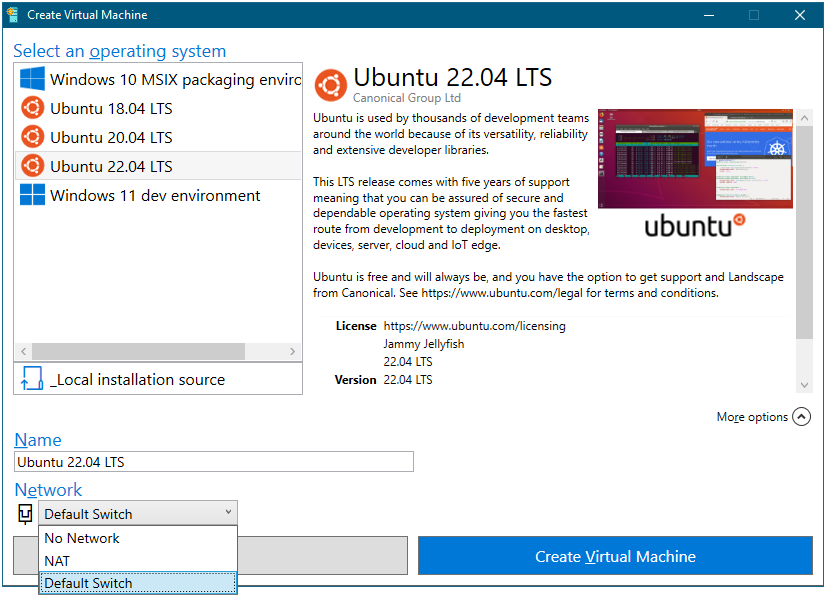 Does too many wrong things.

You should download and install a Server ISO instead. Ubuntu or Fedora.

While this wizard gets your VM quickly setup is has some disadvantages:

If you insist with the wizard at least give the VM a single word name to avoid quoting in scripts and whatnot.

The best way is not always the quickest or easiest:

This is the way.

Additional VM settings that you should do after creation: 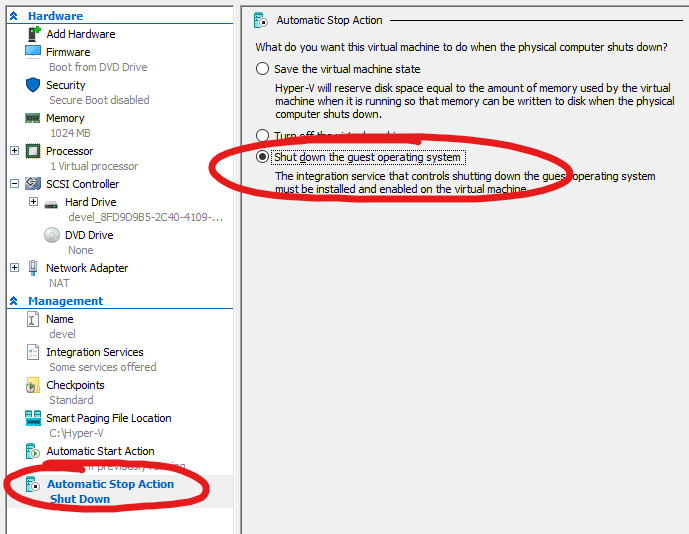 Shutdown guest on host shutdown - avoids disk trashing at shutdown, especially if you allocate a lot of memory to your VM. 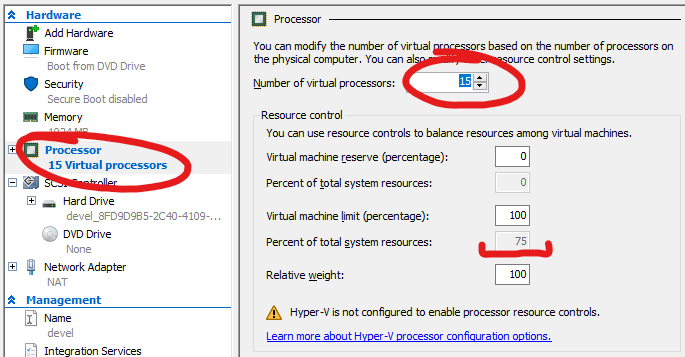 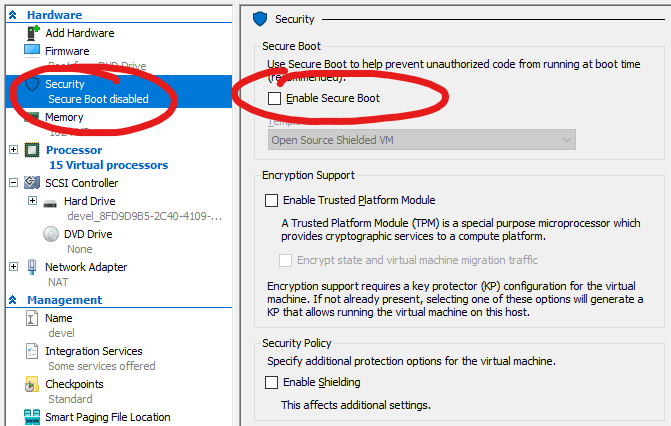 You don't need or want this fancy "security" feature.

You'll notice in the installer that DHCP fails to get an IP, that's because that NAT switch created earlier doesn't have DHCP support at all. This is why this setup is not exactly easy to get into. But once you iron out all the kinks believe me this is the best. 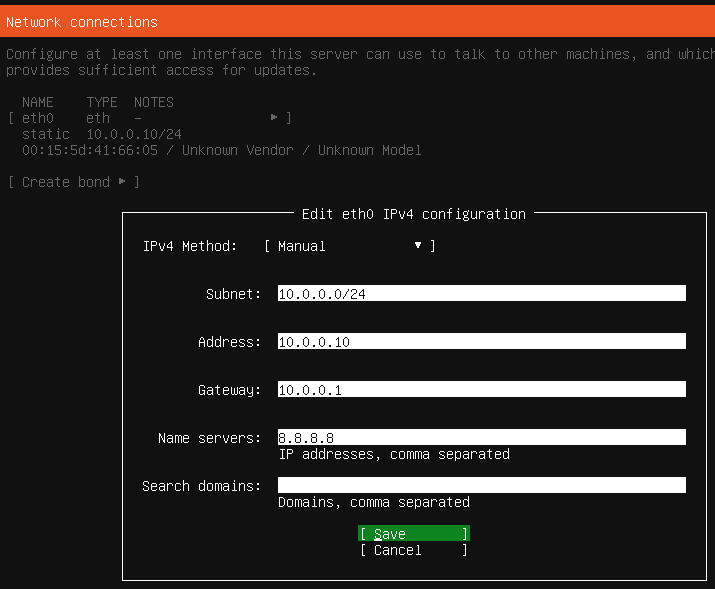 Since you won't be creating VMs all day long this is fine. One time ordeal.

You don't need fancy LVM. If you ever need to resize your storage it's simpler to just boot from a GParted ISO and resize a non-LVM partition. 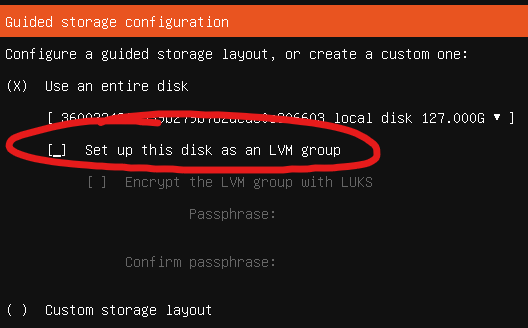 LVM can do software RAID or encryption, features that you don't need or are best left to the host OS.

Note that you can and should install the OpenSSH service right from the setup interface.

You can also import your ssh identity from GitHub. You should setup your VM with ssh identity access for security and convenience anyway. Passwords are a thing of the past.

You can load your .ppk key in Pagent at login by making a shortcut to it in shell:startup (to open it either run that via Start + R or as a File Explorer address).

You don't really need any of the suggested Snap packages, not even docker. You always want the latest officially supported version, and that you can get from: https://docs.docker.com/engine/install/ubuntu/

The simplest way is to install Putty.

You won't be using the X11 forwarding feature from Putty. Other settings that you can try, depending on your preferred shell mileage may vary:

You might need to try a bunch of different settings for the best special keys handling, all dependant on shell.

Bash is the default shell. If you want to experiment you can try zsh (ohmyzsh is a popular way to customize your shell while antigen is the place to go when you want more than just a theme). You should only start tweaking your shell after you got everything else working though!

If you're new to Linux you should go over this cheatsheet.

When getting Docker installed avoid the Docker packages provided by the linux distro or snap. Always use the official one from docker.com, e.g.: https://docs.docker.com/engine/install/ubuntu/

Don't forget to also read https://docs.docker.com/engine/install/linux-postinstall/ as you won't be using the root user for development, and your user needs some extra privileges to access the Docker daemon without sudo.

This setup avoids running a full blown desktop inside the VM for performance and better integration with the Windows desktop. Thus you need to run a X11 server on the host OS (Windows).

There are two options for X11 servers:

VSOCKS are direct communication channels between host machine and guest. You can use it to forward the X11 server on the host to the guest without Putty (and skip all the reliability issues that entails).

To put it differently: VSOCKS are the way to go. Even WSLg is using them.

First the apps running in the guest must be able to connect through these sockets so we must create a proxy and setup X11 env vars.

Install socat if you don't have it already:

Then enable the service:

Make sure you check if it's actually running:

Patch your environment to have correct X11 settings by creating /etc/profile.d/x11vsock.sh:

You should also test that these environment variables appear in your environment after logging in again. Try this in your shell to test:

If it not there then you might need to consider a different file to place these environment variables, e.g.:

Outside the VM (in the host) *

On the host you need to do an obscure registry setting. Create a x11.reg file and then run it:

You can read more about it here.

X410 is pretty simple to setup but it's paid solution. One time, no subscriptions or anything weird.

That's all to it!

VcXsrv is free X11 distribution for Windows. Don't waste your time with Xming, it's advertised as free but you have to pay and wait a least a working day to get the latest version.

First you need to create a config.xlaunch file somewhere:

Now you only need to load this configuration at login by making a shortcut to it in shell:startup (to open it either run that via Start + R or as a File Explorer address).

Before spinning up your favourite IDE it's best to test the X11 connection with something really simple that is easy to debug.

An ugly analog clock application should appear in your taskbar if everything is working properly.

If you get an error then you need to make sure the x11vsock service you created earlier is running, that you have the right DISPLAY environment var is set and that your X11 server is actually running with Hyper-V VSOCK support enabled.

Last but not least you might want some file access from Windows inside your VM. Of all the possible solutions the least worst solution is via SSH - use SFTP Drive.

This entry was tagged as docker hyper-v python

Similar entries: How to run uWSGI, Speeding up Django pagination, Dealing with Docker.